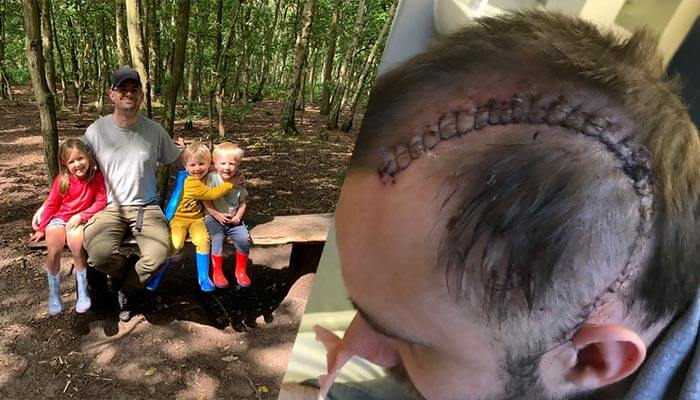 On Christmas Eve in 2019 Ian, his wife Bethan and their 3 children were walking back to their home in Cheshire when Ian was punched out of the blue by someone he didn’t know.

He was knocked to the floor in the assault and hit his head on the curb, causing a traumatic brain injury, blood clot in the temporal lobe known as a subdural haematoma, a fractured skull, paralysed right vocal cord and brain swelling.

Ian, 40, was rushed to the Walton Centre where he had his first life-saving brain operation on Christmas Eve, waking up on Christmas day.

He spent 4 days extremely confused and disorientated, which doctors discovered was due to brain swelling. Ian then had a second operation to remove a large piece of skull to alleviate the pressure on his brain.

Bethan then watched her husband lie in a second coma, this time medically induced, for the next 5 weeks.

Tragically, when Ian woke up again he had forgotten who he was, that he was married to Bethan and that he was a dad to his three children Penny, 5, Casper, 3, and Rufus, 2.

A dental nurse, Bethan had never taken any sick leave before, but knew she would now be forced to leave her job to care for her husband for the foreseeable future.

She said: “I couldn’t go to work and we were struggling for money.

“Even driving to the hospital to visit Ian had cost a lot of money, paying for the tunnel toll and parking.

“Ian was the one who worked full time and on my part time wage I couldn’t cover everything.

“After he came out of the hospital I became Ian’s carer.”

After spotting a leaflet for The Brain Charity in a family room at the Walton Centre, Bethan sat down with Vanessa, one of our information and advice officers.

She talked the family through the money they were entitled to – including PIP, Statutory Sick Pay, ESA and grants, and put them in touch with our legal partners to provide legal advice.

Bethan said: “It was a relief to know there was a charity out there dedicated to people with neurological conditions.

“Vanessa was constantly professional though it felt like we were friends.

“She was constantly there for me, helped me apply for all sorts of benefits, put me in contact with a solicitor and even went along to my first meeting with them to give me a bit of emotional support.”

Ian was left with severe tinnitus, hearing loss in his right ear, headaches, dizziness, depression, anxiety and amnesia, still has some paralysis in his vocal cords and is deaf in his right ear.

He needed another operation to have a plate fitted in his skull and had to relearn how to read and speak.

He said: “I was the victim of violence and its truly terrible consequences. I’m lucky to even be able to reflect on what happened at all.

“Christmas may never be the same, as it will always have haunting memories attached to it.

“It’s a strange time now; on one hand it is a reminder of the terrible trauma I, and my family and friends, endured.

“But on the other, it’s a reminder I am a survivor! It’s a reminder there are so many wonderful people that rallied around to support me, my wife and children.

“The show must go on, because survival is the name of the game.

“For my wife and I, our thoughts are with the people that are experiencing something like this now. It is truly devastating.

“We hope that they each have access to the support The Brain Charity have to offer.”

Inspired by the support The Brain Charity gave her, Bethan will started a degree in Public Health and Wellbeing last September.

In October 2020, Ian’s attacker was jailed for two years after pleading guilty to grievous bodily harm without intent.

Bethan said: “Ian’s really strong, he can walk well as long as he takes it slow. He’s getting clarity of mind, each week as his head gets less foggy.

“He’s positive and determined about that future and especially determined to play with our kids as much as he used to.

“I hope one day I’ll be able to help other people the way The Brain Charity helped me.

“The Brain Charity is a wonderful charity made up of a compassionate and dedicated team who have helped my family and me through this terrible trauma.

“They help so many people in their darkest times, so I hope that we can all help them as they struggle through the pandemic.” 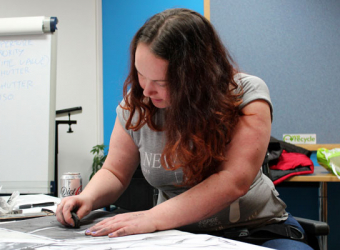 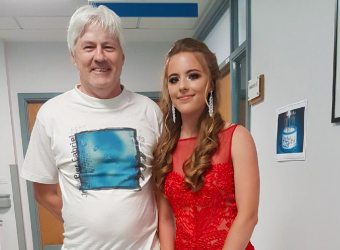 Graham, 58, started his career as a pharmacist at The Walton Centre. 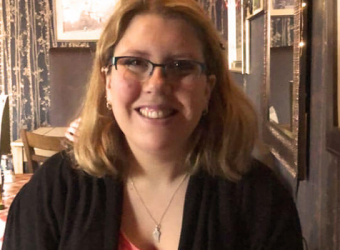